Something odd happened to me last week during bar closing time.

Despite the deluge of Ubergulls in one of the bar districts, there seemed to be a sudden "surge" in street hails for rule-abiding taxicabs.

Sure enough, I managed to hook a fare going to the east end. They asked me if they could make multiple stops, which means that they intend to continue the shared ride after reaching the first destination.

But something odd was going on during the shared ride. The guys in the second and third rows of the van were huddled around a smartphone. I kept hearing Uber this, and Uber that. It was kind of irritating.

When we arrived at the first destination they told me they were all getting out there. They were now going to hook up with an Uber taxi.

He arrived almost as quickly as any cab. Couldn't have been too busy. Dark car with dark tinted windows, like something out of a stalker thriller, and some or all of them piled in.

So, of course, I was left wondering, "why would they choose to switch cabs in the middle of the trip?"

Then I remembered my prediction about Uber's surge pricing policy. Once the public got wise, they would begin to compare prices. They would take Uber when the rates were half of regulated taxi rates, but they would start taking standard cabs when the surge exceeded taxi rates.

My theory is that this is exactly what happened in this case.

Uber was probably surging in the bar district at 2:30 A.M., hence the bump in demand for the cheaper alternative at that time, standard taxis. So they engaged me. But they monitored the Uber rates during the ride until we entered a zone that was not surging, where the sucker Uber drivers were depreciating their capital for half the mandatory taxi rates. At that point, they decided to switch to Uber taxis.

Makes sense to me.

Ayn Rand was Not a Whore.

Get what the Data Engineer at Uber says.

"Basically this scenario involves both rider and driver partaking in fraud."

Where is the fraud?

Uber has repeatedly said that all it does is connect riders with drivers. It's "just a technology company."

Having done that, where do they get off in claiming the driver owes them anything more? That, having full-filled their stated function, that of connecting willing riders with drivers they expect also to get a cut of what the passenger pays the driver for the actual ride?

In other words, how does the "service" of matching riders with drivers translate into a continuing obligation for the driver to pay Uber one red cent?

Uber drivers pay Uber 25% of their gross just for dispatching them. Traditional taxi dispatchers in my city only charge about 6% for the same service.

Uber is a colossal scam.

And talk about scams. How about Hillary Clinton and the DNC in Philadelphia?

Uber partnered with the DNC.

Yeah right. Uber is part of the new libertarian revolution.

Travis Kalanick is NOT the new Ayn Rand. Ayn Rand was NOT a whore.

Are they nuts? Uber's commission should be no higher than standard taxi brokerage fees of about 6%. Paying the Uber brokerage more than 6% is being royally scammed. Clearly, part of Uber's "amazing" success is it's ability to recruit witless trendies who have no idea how to calculate true costs. Once Uber has performed its "matchmaking service" the driver ought to have no further obligation to pay them anything.

If I were driving an Uber cab I would flag the meter as soon as the passenger was in my cab. Uber would get their "booking fee" ($2.50) and 25% of the drop ($.63), for a grand total of $3.13 and not one penny more. The actual trip could be negotiated in cash, credit or debit and there are lots of smartphone meter apps that can be used for the actual ride. Giving Uber 25% of the total cost of the ride is incredibly stupid.

Don't fall for it.

Here's another story. Uber has been funnelling money to MADD (Mothers Against Drunk Driving.) According to this report, Uber has "donated" between $100,000 and up to almost $500,000 to MADD in order for MADD to endorse Uber's "Distractive technology" based method of taxi dispatch. Critics say the MADD study was cooked. ("Last week, I (and everyone else) reported research by the American Journal of Epidemiology that showed Uber has had no measurable impact in reducing drunk driving.")

We need a new group called, Mothers Against Distracted Driving to warn trendy youngsters about using distractive technology based taxicabs which continue to claim innocent lives. 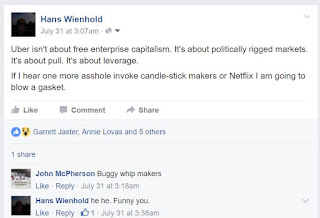