Going over old stuff that I wrote.

I can't remember how long ago I wrote this letter to the editor, but I just re-read it and, man, it was pretty good. At least to me.

I mean, if someone else had written it, I would have known exactly what they were talking about. Plus. there were truths embedded therein that I had not even discovered yet.

Like the enormous expenditure of resources employed in mental hospitals to persuade their involuntary guests to quit the vile and disgusting habit.

Perhaps it has not yet quite reached the point where the general population are seen as patients in need of treatment,  but the goings-on in Ontario's mental hospitals, which I have quite sadly had reason to observe over the last six years, have given me a preview of the type of world progressives, of the Kathleen Wynne/McGuinty "liberal" orientation, would love to see universalized.

Top down conformity. Above all other considerations. Or  Über Alles as the old song goes.

Why do you think they included vaping in the anti-tobacco laws? Because they wanted to protect innocent bystanders from second-hand vapor? Or because they were finally showing their full hand and admitting that this whole issue was never about "protecting" the public in the first place, but about imposing social conformity?

These tolerant, inclusive liberals. I am sick to fucking death of them. The bottom line is, it's their way or the highway.

Sure. They can come up with scary scenarios where crazy mental patients can't be allowed to smoke (even outdoors) while incarcerated because they might light the trash cans on fire, but what is their excuse for prohibiting vaping? That it might provide a negative influence on children?

They provide their guests with inhalers and, I suppose, other smoke cessation aids, provided by the same pharmaceutical corporations that provide their expensive psychotropic medications.

Oh yeah. It's all about the children with these liberals. Except that they don't really give a flying fuck about children, nor anybody else. It ought to be as obvious as the Ontario government's debt of about $300 billion - the repayment of which will fall upon the children's shoulders. (Then again, Hillary Clinton is pretty obvious too, but she is going to be the next president of the United States. She also loves children.)

Here is the thing I wrote about the anti-smoking Jihad way back when....

Anti-Smoking Hate Campaign - Our Own Jihad!

Hamilton's medical community thinks private property has been abolished. It doesn't matter whether we assume they are socialists who believe that all property is communally owned, or merely fascists, who accept nominal private possession while disposition resides with the people with the guns (government).
Hey, why is Canada sending it's armed forces overseas to fight the Taliban when the foes of freedom are right here in our own back yard? Someone perhaps ought to remind the members of Hamilton's medical community that not all 'public places' are 'publicly owned' places and any political system that treats them as such should be resisted by all who value liberty.
And what's this nonsense about the bylaw being a 'treatment' for our community? Since when have patients lost the right to decide whether they wish to receive a given 'treatment'? If this really is a 'treatment' then the proper medical consent forms ought to be sent to everyone who lives in Hamilton before any ban is considered.
This jihad against smokers and those who accomodate them, I.E. privately owned establishments, is aided and ebetted by proponents of the bylaw who spread exagerated statistics about the body count. It's not proven that smoking kills two people a day in Hamilton. The truth is more likely that two of the people who die each day in Hamilon are smokers - whether their demise was caused by smoking or not. And if it can be categoricaly stated that one person a week dies from the effects of second hand smoke then I think the proponents of this bylaw should supply some real proof starting with the names of these victims. I am confident that the anti-smoking faithful cannot produce this information.This proof should be something more substantial than that dishonest TV commercial where the kid talks about how much fun he had with his father who died of some unspecified, likely multi-factorial, disease attributed to smoking.

Funny thing about the internet.

My letter to the editor found it's way into an American court case.

That really cracked me up. 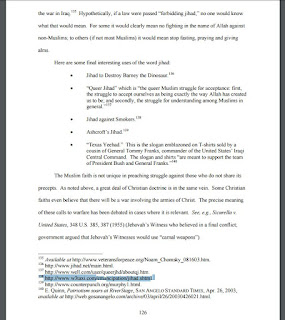 A Public Service Announcement brought to you by Uncle Block's Bullshit Detection Service.