I've seen a lot of pain in the faces of Hamilton cab drivers since the city government basically gave Uber carte-blanche to operate here. It's particularly painful for the older drivers who have devoted decades of their lives to this business, only to have the politicians up-end the apple cart, reducing many of those dislocated cab drivers to wondering whether pushing shopping carts full of junk, for storage in the cardboard boxes they now call home,  will be their next career move.

And don't give me any bullshit about how Hamilton laid a few charges against Uber drivers that would put them on the hook for laughable $305 fines, when A:) those fines are less than one-third of the cost of obtaining a taxi driver's license in Hamilton and B:) their $62 billion ($68) political parent corporation promises to pay their fines. 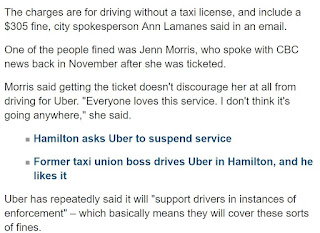 Who profits when the number of taxis on Hamilton's streets balloons from 447 to 1000 as a result of the dishonestly named "new licensing category" Hamilton politicians are going to create in order to legitimize Uber? (and screw everyone else in the Hamilton cab business.)

I don't think so. It's simple pie-chart arithmetic. The more drivers there are the less pie for each driver.

Well, it doesn't really matter to the City Government how many taxis are deployed. In fact, they may even benefit from some marginal extra fees they might be able to extract from all of the Ubered Piper's sweet seductions.

Hmmm.... It really doesn't matter to Uber whether it has 100 cabs or 1000 cabs deployed in Hamilton.

Now let's switch over to every cab driver's nightmare. There are now 1,000 Uber cabs on the streets of Hamilton, moving forward to the full implementation of the "sharing economy."

The nightly take of each Uber cabbie is now reduced to a third-world sounding number..... $20.

I mean, talk about "sharing."

It's the next best thing to running a numbers racket, except that the government has already expropriated that industry.

Uber is not a technology company. Uber is a political company. It's expertise lies not in some silly app. It lies in knowing how to exploit the fault lines and fissures in a corrupt political structure. It would not exist in a free economy.


A Public Service Announcement brought to you by Uncle Block's Bullshit Detection Service.