Harking back to my early (pre) teen years, we went through a mischief phase. We played "knocking on ginger," including the enhanced burning bag of poop version, or we threw snowballs at cars. We even lit a number of field fires. After the fire department arrived we would even help them put the fire out.

We were quite proud to learn by word of mouth that a police officer was quoted as saying that the West Mountain had more mischief complaints than any other area of the city.

We called one of our favorite games "punch out."

We always used the same location for "punch out." It was at the southwest corner of Bendemere Ave and Columbia drive on the property of the St. Vincent-de-Paul Catholic School. And we always played it after dark. Out of five or six of us we would select our voluntary "victim." Then we would wait for a vehicle to approach along Bendemere from the west. 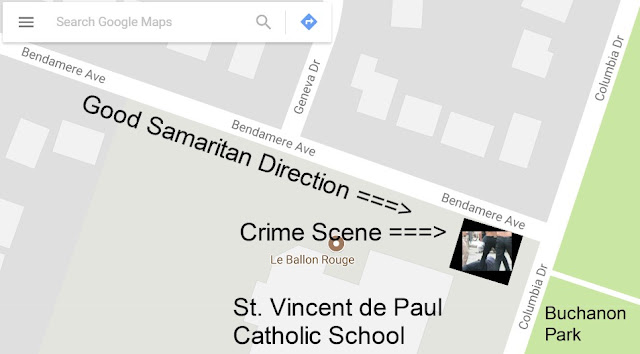 As the vehicle got closer we would would all pretend to be ganging up and kicking the shit out of our volunteer. Most of the cars just passed on by, but every now and then, a driver would take the situation seriously and attempt to heroically rescue the victim.

Sometimes, this could get pretty hairy. There was one time when this Ford Mustang came to a screeching stop. We all ran east into Buchanan Park believing no sane driver would dare drive over the sidewalk and into the park after us. On this occasion we miscalculated and the Mustang came racing after us through the park. Despite the Good Samaritan's heroic act, I don't recall any of our "gang" members being apprehended.

There was only one time that I can remember where one of our members was apprehended. The Samaritan appeared to be on his way to a wedding because he was formally attired. One report said he stumbled and ruined his suit. The guy he finally collared (literally) was the biggest, slowest moving, and slowest thinking member of our group, who tried to explain that the whole thing was just a joke. Unfortunately, due to limited language skills, instead of saying, "it was all pretend," or "it wasn't a real beating," he told the guy in the torn tuxedo, "We was ony

By the way, he was the only one who got caught the time we strung a roll of paper towel across Mohawk road as an informal road block. I think the driver punched him in the head.

It was circa 1966 and the entire population of Hamilton's mountain was almost entirely lily white. If we had had any black, Sikh, or other minority gang members at the time, I am certain we would have all agreed that using one of them as our volunteer victim would be a great way to magnify the impact of our mischeivous stunt.

And we hadn't even started drinking that cheap $buck-five-come-alive rot-gut wine yet.

Other Items of Interest

Woman sexually assaulted inside SUV she mistook for Uber: police

I predicted this over a year ago...