A group of rowdy young males approached the taxi stand at about 10:00 P.M. looking for a taxi ride to Guelph Line and Upper Middle Road in Burlington, a distance of 18.2 Km. 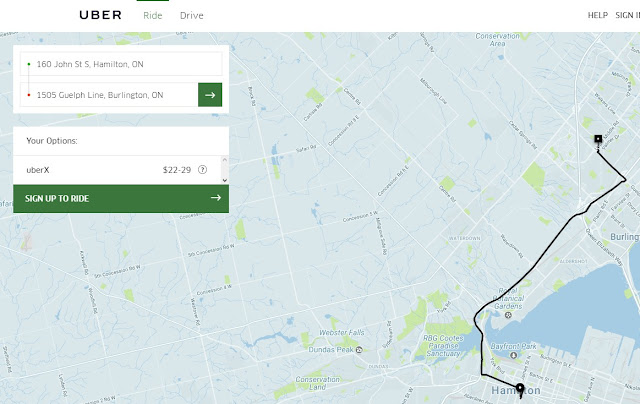 As is so typical of younger Canadians, raised and educated in Ontario's liberal dominated "Me First" culture of entitlement, the rider became indignant and intimidating when the driver refused to match Uber's rate and break the law. The millennial then taunted all of the non-exempt cabbies who were present by announcing he would take a tariff-exempt Uber taxi instead.

Some of the non-exempt cab drivers reciprocated by taunting the indignant millenial right back. The situation became tense for a while. The potential for violence was palpable.

Violence in the taxi business has been cited as one of the reasons the Hackney trade was regulated by the City of London in 1654, and by the city of New York in 1937. By 2008, most cities in the west had adopted similar regulations as well.

So far, Hamilton's pro-Uber, two-tiered taxi bylaw has not resulted in much violence. There was one report of an Uber driver pushing a cab driver for taking his photo. There have been numerous reports of horn honking and bird-flipping between status (exempt) and non-status (non-exempt) cab drivers in Hamilton.

One Uber driver recently caused a stir by agreeing to accept $15 in cash for a for an uninsured ride from the bus terminal to the airport. Non-Uber taxis must charge approximately $30.00 for the same run. This undercutting of the non-exempt drivers, right in front of their noses, caused quite a stir.

Mind you, I admire the Uber driver's entrepreneurial spirit. In a free country, all prices would be negotiated on a voluntary basis, and the waiving of insurance protection by a taxi passenger would be fully recognized and protected under the law. If a passenger agrees to accept an uninsured taxi ride, that should be the passenger's choice. Correspondingly, if the passenger should be injured as a result of opting for a discounted cash rate in an uninsured Uber taxi, the driver should be immune from any subsequent lawsuit.

But Canada is not a free country. So there's that. 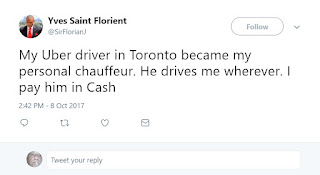 Thank your local politicians for facilitating this friction.

As more Uber cabbies flood into the taxi market, driven by Liberal barriers to employment, like the pending $15.00 minimum wage, combined with Federal Liberal initiatives to flood the job market with low skilled workers, via continued third world immigration, the situation can only become increasingly tense between all cab drivers. More desperate Uber drivers will take the risk of driving uninsured cash fares. As they dig deeper into the livelihoods of Hamilton's non-status taxi drivers, the potential for violence can be expected to rise accordingly.

This is what happens when a group of politicians with no knowledge of history, and even less knowledge of economics, are given the power to make decisions for which they are not qualified.

"Those who do not remember the past are condemned to repeat it." -- George Santayana

As I sat reading the Stoney Creek News this week, I observed a false statement in one of the articles (Hamilton politicians approve motion to crack down on pot shops.) It stated, "Hamilton eventually crafted a bylaw that allowed Uber to operate while also satisfying the taxi industry’s concerns."

This statement is not only false. It is fake news. It is actually very fake news.

My guess is that the author did not do any research before including this claim in his article. He was probably just quoting Hamilton's mayor, Fred Eisenberger's untrue statements in the wake of the Government/Uber deal that was cut and pasted into Hamilton's taxi bylaw earlier in 2017.

I provided my own report on Youtube, which totally destroyed the mayor's preposterous claim.

At first, I thought perhaps I had gone too far when I accused the mayor of spreading fake news. Maybe he just doesn't know what he's talking about.

But then, I received an email from Fred, wherein-in he came right out and admitted that he was not telling the truth about the bylaw revisions. He stated, "The stakeholder team that worked with Licensing was unanimous in their recommendation, which is what my tweet referenced." In other words, he was NOT referencing the taxi industry. He was referencing a "stakeholder team." So why didn't he just say that??? Hint: It wouldn't have sounded as good.

It was a frank admission that the taxi industry was not consulted. As far as I have been able to determine, the members of the "stakeholder team" consisted only of the brokers and the taxi school (which relies on coerced enrollment for non-exempt taxi drivers. No "diploma" - no license. Meanwhile, Uber cabbies hit the streets with no "training" at all.) The brokers and the taxi school are two entities which almost NEVER have the interests of the rank and file taxi industry at heart. Of course, it goes without saying, despite being a vocal member of Hamilton's taxi industry, I was not invited to participate in the back-room deliberations.

Mayor Fred went so far as to dig himself even deeper by stating,

"I realize that not all drivers, yourself included, are fans of the compromise that was ratified and put into place."

"Not all drivers." Can you believe that audacious horse-shit? The actual truth is than Not ANY drivers were fans of the "compromise that was ratified and put into place." A compromise which lead to as much as a 50% reduction in earnings for non-exempt cab drivers. As one respondent said when asked about Eisenberger's "backing of the taxi industry claim," (see my video) -- "why would they?"

None of them were even asked.

HOW THE HELL, could the mayor, KNOWING THIS, nevertheless claim that the collusion between the City of Hamilton, the Uber taxi brokerage, the other taxi brokers, and the taxi school, in even the remotest fantasy, had the "backing" of the taxi industry?

I suppose one could call the mayor a liar. Equally credible would be that the mayor is uninformed, yet pretends to be otherwise. None of this matters when the claim turns out to be FALSE. I like to stick to facts.

And as far as those drivers, like myself, are concerned.... you know, people who take it upon themselves to let the politicians know what they are thinking about without being asked, well, councilor Maria Pearson put it all into perspective when she said,

"Hans Wienhold? Oh, I just delete all of his emails."

Either the mayor was lying, or he was completely delusional. I happen to believe that most politicians suffer from various degrees of both of these serious flaws. (See the Global Warming Hoax.)

I don't think that the mayor is a bad guy. He is just a guy who responds to the incentives that are placed in front of him on a daily basis, (like the numerous photo ops) with an eye to securing his own career. There is nothing inherently wrong with that approach. We all do it.

And if you think this politically engineered system is bad, just wait until the next, long overdue, recession hits. And lots of people find themselves out of work (exacerbated by a $15/hr minimum wage law.) And just as in NYC in the 1930's, everybody and his brother floods into the non-minimum wage sector to become an Uber driver.

Now that you should see.