"a special right, advantage, or immunity granted or available only to a particular person or group of people."

Like having your religion singled out as being beyond critisism or reproach.

Or, not so lately, there has been an alarming increase in examples of racism against white people.

It's okay for any other designated group to vilify a collective based on skin colour, so long as the colour is white.

And I've been aware of the subtle planting of the seed of white evil for decades now.

I found it amusing at first. Overt racism was being accepted as anti-racism. In it's earliest stages it was called, "affirmative action."

The term "affirmative action" was first used in the United States in "Executive Order No. 10925",[9] signed by President John F. Kennedy on 6 March 1961, which included a provision that government contractors "take affirmative action to ensure that applicants are employed, and employees are treated during employment, without regard to their race, creed, color, or national origin."[10] It was used to promote actions that achieve non-discrimination. In 1965, President Lyndon B. Johnson issued Executive Order 11246 which required government employers to take "affirmative action" to "hire without regard to race, religion and national origin". This prevented employers from discriminating against members of disadvantaged groups. In 1967, gender was added to the anti-discrimination list.[11]

Affirmative action is intended to promote the opportunities of defined minority groups within a society to give them equal access to that of the majority population.[12]

It is often instituted for government and educational settings to ensure that certain designated "minority groups" within a society are able to participate in all provided opportunities including promotional, educational, and training opportunities.[13]

The stated justification for affirmative action by its proponents is that it helps to compensate for past discrimination, persecution or exploitation by the ruling class of a culture,[14] and to address existing discrimination.[15]

Notwithstanding the "stated justification," what this policy ushered in was a precedent for the government to become ever more deeply involved in the allocation of goodies using race as a criterion. And what resulted was an increase in the racialization of every aspect of life.

The result was easily predictable.

Race became a commodity. It was like having a special card. It could get you a job, or a government "job," or admission to a racially allocated university program.

In a free market it would have been worthless, but in a political market, it can be worth a lot. It becomes a product, with a price attached, just like a driver's license.

This has emboldened those who see themselves as possible beneficiaries of state involvement in wealth distribution along racial lines. (Mostly those with a communist bent. Like Hamilton's Mathew Green.)

Therefore, it ought come as no surprise that we now see a growing effort amongst those of the communist persuasion, (whether they are aware of it, or not,) to focus upon the group who's ancestors are allegedley responsible for all of the evils in the world. 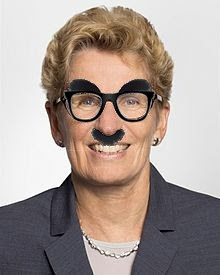 I have been white all of my life. That's how I was born. I find the notion that I was saddled with guilt from the moment I entered this world just as offensive as the idea that today's newborns are already saddled with the debts the liberal politicians have bequeathed them.

It makes me want to puque.

This is my declaration:

I was born white.

There is nothing wrong with that.

I refuse to accept any form or level of guilt for any alleged crimes committed by other white people in the past.

And if and when anyone dares to order me to stiffle my opinion, or "check my privilege" because I happen to be white, I am going to tell them to go and fuck themselves.

It's about time white people started standing up for themselves.

It's one thing to go all bravado with phony pride. "I am a Canadian, I watch hockey, and drink beer, and get plastered and walk around yelling, 'Yippee, my team won the game!'

It's quite another to go around declaring that, as a Canadian you are ashamed of your country, and it's Anglo-European history, and the fact that the people who built this country were mostly of Anglo-European origin, is a reason to abolish this country and replace it with third world immigrants.

I say fuck you. Go to Africa or the Middle East. Take your fucking "diversity" with you, and make those countries "strong."

Man. Sometimes I feel like Donald Trump when it comes to negotiating skills.

I just finished off a bottle of wine but was not ready to quit celebrating.

My son had one tall can of beer in the fridge.

When I first asked him if I could have it, to complete my work for this day, he refused. "It's my last beer," he said.

So I decided to appeal to his conscience, using the tools I have learned from the left over the years.

I am drinking that beer right now.