When I hitch-hiked across the American south back in 1976, from Florida to California, mostly along Highway 10, it seemed that every vehicle that drove by was either a transport truck or a pickup truck. And every pickup truck had a gun rack in the cab and many of those contained rifles. It was definitely a gun culture.

Was I worried? Not in the least.

I was thumbing with Ed. We got a ride from these two guys from Arkansas. Talk about your country boy stereotypes. They had a car, a beat up old Caddy or something, and when we got into the back seat, our feet were resting on the two rifles that were just sitting on the floor. But I wasn't nervous. They were just a couple of good ol' boys, with a pronounced southern drawl, probably farmers or ranchers. The trip was uneventful.

And of course, I grew up across the street from a guy whose father was a hunter and who had a small, deadly arsenal in his basement. It never bothered me. Nor, as far as I know, did it bother anyone else who lived in the neighborhood at the time. Mass shootings were extremely rare.

When I stayed at the farmhouse near Bel Aire MD around 1966, where my father had been a guest as a German POW from about 1945 to 48, there was a double-barrel shotgun leaning in the corner by the kitchen door. (And a neato Civil War saber in the living room sitting with the point in a spitoon by the fireplace. I picked it up. Man, it was heavy.)

Gun culture was obviously integral to American history. But you hardly ever had mass shootings in those days. The one exception that stands out in my mind was the Texas bell tower sniper, who had a brain tumor.

"Gun culture," has been a part of U.S. history since the beginning. The elevated frequency of mass shootings seems to be a relatively new phenomenon. A lot of it is fueled by mass media. Most recent mass shootings seem to involve the use of SSRI's (anti-depressants.) I think the epidemic of depression and social isolation wrought by excessive digital distraction via smartphones and social media can only make the problem worse. 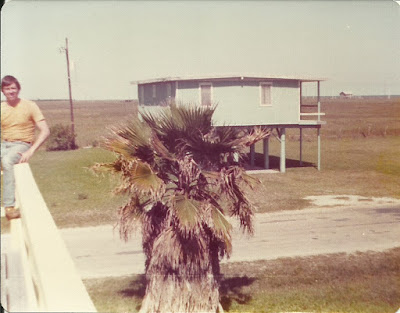 Oh, Ed and I did meet one potentially homicidal maniac in Galveston TX during that trip. We spent three days drinking with him at his stilted house. He was a Viet Nam veteran, Navy Recon he told us. If he wasn't full of shit, he had been through some serious stuff over there. He had a small arsenal, including a Tommy Gun, an M1, and a 9mm automatic pistol. And a BB gun. While Ed and I were out on the balcony shooting "love bugs" with the BB gun, he burst out of the house with his M1 and fired a live round into the ground. That, and some of the political conversations we had with him made me leary of the guy. 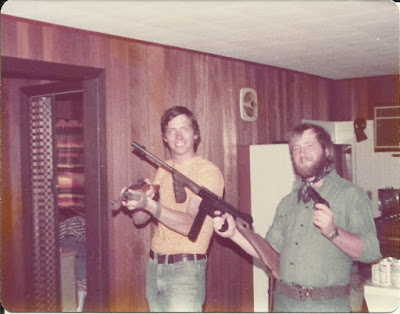 Now we have another vet, highly decorated it seems, whose vocation involved the skill of killing people. Frustrated with life and suffering from PTSD he acted out in the way he had been trained to do.

It's not gun ownership, per se, that is at the root of these mass shootings, IMHO. It's the result of a confluence of negative influences stemming from the welfare/warfare state, mass media broadcasts of these acts, along with an apparent epidemic of mental illness exacerbated by pharmaceuticals and digital media dependence.