The Google Conspiracy - "A Single Point of Truth"

About twenty-five or so years ago I was engaged in some quite intense debates on the Hamilton Spectator's bulletin board. At first, it was called "Compuspec." Then it was renamed "SpecLink." Shortly thereafter I learned about the internet and got myself connected as fast as I could.

My first browsing experience was via the Hamilton-Wentworth Freenet, a free dial-in internet service. I was using the Samsung XT compatible PC I bought in 1988 with 640 K of Ram, a 30 Mb Seagate hard drive, and a 2400 baud modem.

Soon after I got on I caught a glimpse of the HTML code behind one of the docs I was viewing. I thought, "That doesn't look too difficult. I can probably learn it myself."

Up until then, I used to write letters to the editors of various Ontario newspapers. Few ever saw the light of day. It was frustrating.

But this new internet thing was very exciting. It immediately occurred to me that I could post my letters on the internet without having them filtered by biased editorial staff at the newspapers. I could literally self-publish and I have been doing so ever since.

What I didn't realize at the time, but has become all too clear since then was that this new information technology was the hole in the dike for the corporate media.

They could no longer control the narrative!

I was there for the birth of alternative media.

It was truly liberating.

The rest is history.

What we are seeing today, in living color, is a desperate attempt by corporate interests to regain control of the narrative. For the first twenty or so years, I naively believed that the genie was finally out of the bottle and along with the, then seemingly rock-solid right to freedom of speech, never to be forced back in.

But I was obviously wrong about that. And I now realize that the devotion to freedom of speech in the West was pure fiction. It was a fiction that would be tolerated only so long as "the people" remained effectively voiceless.

Of course, the more I learn about history, the more I realize that the Infowar has been going on forever and what we are now witnessing is just the latest iteration in that process.

As we can see from James O'Keefe's report, the Infowar is now more intense and dirtier than ever. 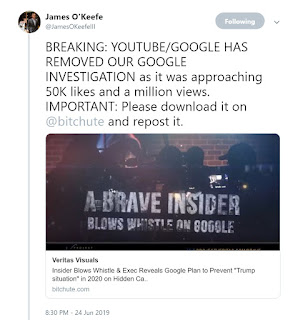 I accepted his invitation and uploaded his report to my own YouTube channel.

In the event that is has been 1984'd you can also view it on BitChute.

Note: I followed along with the Google whistleblower and entered the same keywords into their search engine. I took screenshots and saved them to my hard drive.

Here are the results: