Nazi Scum get off our Streets!

I was there at around 7:30. A group of five or six formed a semi-circle around me, screaming "Nazi scum get off our streets," or something. I wasn't even wearing my MAGA cap.

A cop asked me if I had a ticket for the event. I told him I was just looking to buy an ANTIFA T-shirt but they weren't selling any. The cop ordered me to leave. I didn't want to get arrested for trespassing or something like the ANTIFA mob was doing, so I left.

Here is a report from Hamilton's local "News" paper. It doesn't mention Antifa, only "protesters."

One of the Jesse James imposters has been identified. 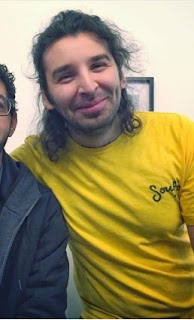 Antifa in orange shirt is Alaa Soufi Dalua. I contacted Soufi's restaurant in Toronto this AM, to confirm story that he worked there. To my surprise, his father confirmed to me it was his son behind the mask, but painted a benign portrait of his son. Not buying it. pic.twitter.com/2vfYbXm9hB

The "Nazi" discussion that the Antifa storm-troopers were trying to prevent.