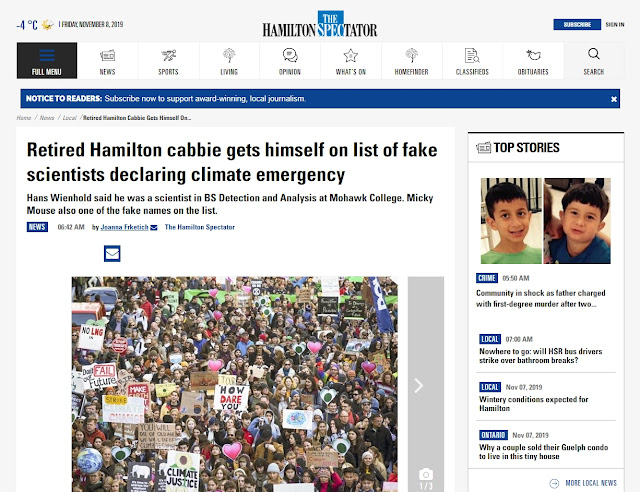 On Saturday, Nov 9, 2019, the Spectator published a BS piece on it's opinion page in an effort demonize the BS detectors who contributed to exposing the "List of fake scientists declaring [a] climate emergency."

This is another shining example of the arrogant attitude of the people who dominate the fake news media.

"Within hours of The Spectator’s Joanna Frketich reporting on the fake, the internet lit up with trolls, climate change deniers, flat earthers and libertarian conspiracy theorists all seizing on the fakes to discredit the petition."

Do you see how this works?

To emphasize my point, tell me seriously, how many "flat earthers" do you think were lighting up the internet in response to this report? I am actually surprised they didn't also choose to bundle Nazis, fascists, racists, and Trump supporters in with the libertarian knuckle draggers! This is how they sleaze-spin words to manipulate a sleepy public mind.

"To the 34 people — including a handful in Hamilton — who fraudulently signed a climate crisis warning,"

They are telling us that only 34 people fraudulently signed the *global* petition. Really?

And out of that 34 people, a "handful" came from Hamilton? Those estimates sound fishy right off the bat. I smell BS.

Does that 34 number include the,

"Social scientists [that] are also very much involved in climate change discussion because of the impact of climate change on our society. It's not necessarily the scientist that's working in a lab and doing that environmental work, but they could be doing work about how populations are going to need to adjust or respond to climate change."

and who, therefore, according to Bruce Newbold, from the advisory board of the McMaster University Centre for Climate Change, could have non-fraudulently signed on to that list?

That might include people like Professor Dan McKinnon, the city's public works manager, who is quoted in a CBC article (Apr 16, 2018) saying "as climate change worsens, road conditions will too." (Before long, they will be blaming ingrown toenails on climate change.) Certainly, he is supposed to be "doing work about how populations are going to need to adjust or respond to climate change," because of all the potholes on Hamilton streets. (How convenient!)

Or Professor Sam Sidawi, the city's head of asset management in 2018 who says in the same article, "Certainly, this is a climate change issue." (Not one of government incompetence.)

And let's not forget about Professor Justin Trudeau ("babies are scientists") and his colleague, Professor Catherine McKenna who are both doing a great job (more like con job,) "doing work about how populations are going to need to adjust or respond to climate change."

No wonder these clowns need a $600 million bailout from Professor Justin Trudeau.

Signed on November 20, 2019, by Professor Hans Wienhold, an expert in the science of BS detection and analysis, not currently affiliated with Mohawk College.

“But you know, I actually gave them some real advice. I said that if you actually say it louder, we’ve learned in the House of Commons, if you repeat it, if you say it louder, if that is your talking point, people will totally believe it,” Catherine McKenna. 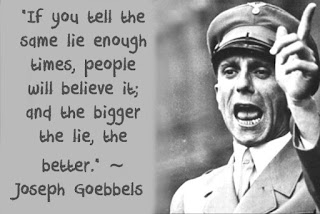 The exact text of my interview with Joanna Frketich

Why did you do it?

I did it because I was already aware that the claim that 97% of all climate scientists agree with the climate alarm was bogus, that many of them were not climate scientists but were rather activists and government hacks. I was curious about whether there would be any attempt to verify my credentials on this list before any publication touting the list of signatories.

I think I made my point.

What message would you like people to get from it?

The message is not to believe anything you are being told by the legacy corporate media. Their function is not to inform but rather to manipulate opinion in pursuit of a political agenda.

Were you surprised your name made it on the published list? Why or why not?

I was not surprised my name made it to that list because it has become all too obvious that "news," even if accurate, is distributed or withheld depending upon whether or not it promotes certain interests. Just take a look at the Amy Robach revelations that were recently publicized by Project Veritas.

I am not satisfied with my answer to this question upon review because it doesn't really answer the question. This was not a deliberate attempt on my part to mislead.

What I should have said was that I was not surprised my name made it to that list because I believed the priority of the people generating the list was to inflate the numbers as much as possible to generate scary headlines. It seemed unlikely they would devote much effort toward quality control. Therefore, I was not surprised at the outcome.

What do you think this says about the BioScience article?

I haven't read the article.

Is it still accurate to call you a Hamilton cab driver?

The best description would be "Retired cab driver."

Do 97% of scientists actually agree on climate change?