"CBC Fifth Estate’s Passport Babies producer says focus was on the shadow industry + health care burdens. I find it mind-boggling that they negatively portrayed a demographic that is the target of xenophobes in B.C. and were oblivious to its implications:"
8:58 AM - 10 Jan 2020

In this screed, Shree blames concerns over foreigners sucking Canadian taxpayers dry via birth tourism on, wait for it.... racism. In her mind, of course, it's all about racism. Shreee says, "In this current build-a-wall era, media portrayals are allowing an insignificant unknown number of legal but controversial births to become proof positive of the scamming foreigner stereotype."

As if an unknown number of legal scam births could in any way be indicative of foreigners taking advantage of Canadian socialism.

Shree's going to leave it at that for now. Good.

Of course, she leaves it to her fans to point out that the practice is "racist." And if I pronounce yogurt as "yogurt" with a soft "O" what does that make me?

Also reminds me of the ridicule I've received from many Americans over the way we Canadians say, "roof." --- Woof! Got to love it, ey?

"Study by @KanikaSamuels examined nearly 6,500 cases between 2007 to 2013 for differences in how a young person was treated for two common offences: simple drug possession or minor theft charges."
6:07 AM - 7 Jan 2020

I'm not going to even try to analyse those numbers because that would be racist.

In response to, "I don't think anyone can seriously argue that if Prime Minister Justin Trudeau's last name wasn't 'Trudeau' he'd be PM today. The Liberal party certainly wouldn't have chosen Justin Smith as their leader, given his resume at the time."

Shree Paradkar is described as "the Toronto Star columnist devoted to issues of discrimination and identity."

"The truth is, what we know as "The Western World" was built on, among others, the blood of enslaved Africans, indentured Indians, and the mass slaughter of Indigenous peoples all over the planet."
4:10 PM - 4 Jan 2020

If Mr. Domise were honestly interested in "the truth," he would try to broaden his knowledge of world history a little bit. Perhaps then he would know that victims of slavery, indentured servitude, and mass slaughter are by no means restricted to Africans and Indians.

Furthermore, his implied claim that all of that which makes the West a desirable destination for black and brown people from across the globe was because they actually built the west is too stupid to be stupid. So where does that leave Mr. Domise? Stupid? Or dishonest?

I mean, seriously, if they built the West, why on earth did they neglect to build their own countries?

For example, in my earlier working years I worked in factories, the building trades, and in the Alberta oil fields. I can drive around Hamilton today and see buildings that contain my DNA - from my blood and sweat. Among these are:

to name just a few.

While going to college from 1981-1983 I worked on a framing crew building houses, mostly in Burlington, in the area of Upper Middle Road. Those were long days in the hot sun. By the end of those summers, I was a brown person building a small part of the West.

I guess I was one of those unidentified "others" who helped build the West.

To hear ingrates and perpetual belly-achers like Andray Domise smear every productive white person who ever lived is a bit much. Don't you think?

Mr Domise is a person of color who has discovered a way to make a living by riding the wave of liberal inspired ethnomasochism in Canada. Whomever the black people who "built the West" were, we can be certain of one thing, Andray Domise wasn't one of them. He has, however made an apparently successful career out of tearing the West down by cashing in on his status as a victim. 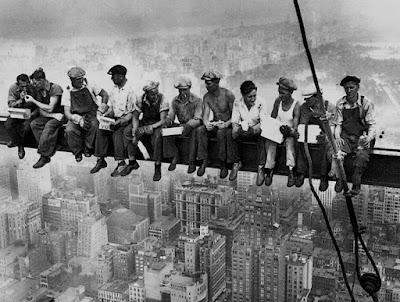 Remember “Lunch Atop a Skyscraper,” the famous 1932 photo of 11 men sitting on a steel beam high above Manhattan?

“As many as four of these men are Mohawks,” Lemmon says."

I suppose if he could get away with it, Mr. Domise would claim that the rest were enslaved Africans and indentured Indians.... among others. 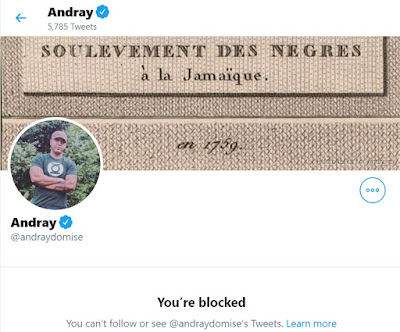 Matthew is clever enough to avoid putting his own thoughts into words on Twitter so I have little to report on him at this time.

You can get some indication of where his sympathies lie, however, by observing who he likes to reTweet on his feed. If it stirs up racial animosity, he's all in. If it stokes envy, he's in. If it favors foreigners, he's in.

One thing that gives me a chuckle is the frequency with which, in conversation with random acquaintances, or passengers when I was still driving a cab people would reply, "Oh, you mean the racist?" whenever I mentioned his name. 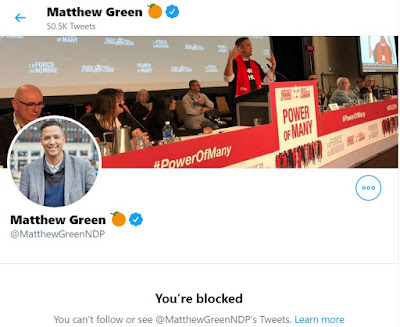 Desmond Cole is another person of color who discovered that he could make a living as a race-baiter in Canada rather than doing any actual work.

The criticism applied to other prominent race-baiters in this essay apply equally to him. 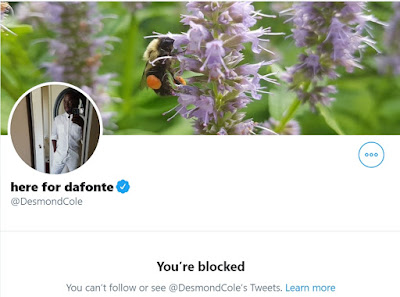 I was recently banned from Twitter. What happened? I'll use their words:

What happened?
We have determined that this account violated the Twitter Rules. Specifically, for:
As a result, we’ve temporarily limited some of your account features. While in this state, you can still browse Twitter, but you’re limited to only sending Direct Messages to your followers –– no Tweets, Retweets, follows, or likes. Learn more. Your account will be restored to full functionality in: 12 hours and 0 minutes.
You can start your countdown and continue to Twitter once you:
If you think we’ve made a mistake, you can appeal the violation.

I made the prohibited remark in response to another very successful race-baiter on Twitter who calls himself "StanceGrounded" as if to imply he adheres to some set of immutable principles the nature of which, outside of his obvious hatred of everything and everyone Western and white, are impossible to discern.

Curiously, he has a pinned Tweet at the top of the porcine provender he serves up daily to his schlop-gobbling groupies showing himself heroically being escorted out of an apparent Trump rally for yelling, "All Mexicans are rapists." Go figger!

Also, impossible to discern is who he really is. In addition to the "StanceGrounded" fake name his Twitter handle is "@_SJPeace_." His list of followers is impressive, running at about 340,000 as of this morning, yet I have been unable to find anything out about who he really is using the usual internet search tools.

Mr. Grounded had posted a video of a young white girl throwing a hissy-fit after opening a Christmas present and finding a Black doll.

I've been around long enough to know that kids can throw tantrums for a myriad of reasons. For example, perhaps the little girl had requested a specific toy and, upon opening this gift and discovering it was not what she asked for, she freaked out.

But according to Mr. Stance, "This was an experiment conducted to see if the racism they teach their daughter actually had been taught." I did another internet search to see if Mr. Stance's claim had any sources and came up blank. Already familiar with his schtick, I surmised that he had simply imagined it to be true.

"Its these types of parents ARE WHY RACISM STILL EXISTS TODAY.

These are the parents that should be separated from their children and detained.

(Also if you don't know a muslim or have a friend that is, u do know. follow)"

Without any apparent evidence, Mr. Grounded calls for family separation and detention. Without presenting a shred of evidence he has already pronounced the family guilty and prescribed the punishment. In my book, that's just a mild form of lynching.

Hang the parents from the nearest lamppost and send the child to one of those slave markets in Pakistan.

(Also if you don't know a muslim or have a friend that is, u do know. follow)

Twitter has told me that the only way I will be allowed back into their left-wing echo chamber is if I recant my Tweet.

Since then, if I try to log on to Twitter I am greeted by the following screen,

It should be obvious to all but the most brain-dead liberal that my comment did not promote violence against, threaten, or harass other people on the basis of race, ethnicity, national origin, sexual orientation, gender, gender identity, religious affiliation, age, disability, or serious disease, unless the reader is stupid enough to think I was seriously advocating the more severe punishments for this white family than those Mr. Grounded was prescribing.

Hans Wienhold
@Hans_Wienhold
@_SJPeace_ Why stop at ICE style family separation? Hang the parents from the nearest lamppost and send the child to one of those slave markets in Pakistan. (Also if you don't know a muslim or have a friend that is, u do know. follow)
Dec 28, 2019, 5:04 PM
By clicking the above button, you are removing the content of your Tweet and forgoing the option to appeal this violation. Please note that the original content will be replaced with a notice stating your Tweet is no longer available because it violated the Twitter Rules. This notice will be accessible via direct URL and from your profile timeline for 14 days. Learn more.
If you think we've made a mistake, submit an appeal to us. Please note that should you do so, your account will remain locked while we review your appeal.

I went through the appeal process once and was denied.

It will be a cold day in hell before I allow myself to be acclimated into self-censorship in order to comply with Twitter's left-wing acceptable speech code double standards.

I have been criticized from time to time for the tone of my writing. People have said, "You know, you can attract more flies with honey than vinegar." But why would I want to attract flies?

Which came into my mailbox just a few minutes ago.

I am proud to say that I have already added my voice to the conversation.

BREAKING THE CHAINS OF THE ANTI-WHITE WEST

‘Being Nice’ is Now a ‘Tool Of White Supremacy,’ Says Social Justice Group