How spoiled we have all become.

As I read this I thought about the Irish potato famine.

At one time, a good crisis was simple. No potatoes and a million Irish people starved to death. Now the problem is far more complicated. There are too many potatoes. And because the government has declared that certain businesses are essential, but millions of people's jobs aren't, and, in response, our courageous leaders are willing to put themselves out so far as to conjure up billions of dollars out of thin air to "protect" everyone from disaster, we end up with the problem of TOO MUCH food. In some places. (Of course, the liberal scolds come out of the woodwork and remind everyone that eating French Fries is bad for you, anyway. And the Gretas are out there telling us that people can even drink out of the Ganga river because a few weeks of low carbon economics have resulted in environmental miracles.)

I won't say I would never have believed it. I do believe it. This is how governments work. They pretend to be capable of solving problems, but in the end, they always make things much worse. I am an aficionado of Twentieth Century historical documentaries. I have seen this all before.

The cure IS worse than the disease.

There is something very Soviet Union about this picture. There was food, but the supply chain had been totally politicized. So people starved.

But then, too much food today might be not enough food tomorrow, especially if "millions of pounds of potatoes are at risk of being thrown away."

But it can't happen here, right? (he says, winking. We're too advanced to allow something like that to happen. After all, we live in a democracy, he says while wearing his mask in the grocery store line. "The people are the government.")

My parents grew up during the Great Depression and World War II. I've never been hungry in my whole life if you don't count the three days I was stuck hitch-hiking outside of Kamloops back in '76. And even then I had a package of Rye-Vita to get by on. Thankfully, a retired couple with a trailer picked us up and drove us as far as Banff. The guy kept on stopping along the way and buying six-packs of beer, which he shared with us. Who needed food?

But my parents would freak out if food was wasted. It just wasn't done.

My old man had a very weird souvenir.

It was a peanut butter jar (I think the brand was "Dare.") with a potato, a piece of bread, and some salt in it. The potato had been totally desiccated. It was the size of a small walnut and it looked like one. The bread was as hard as a rock. You could have smashed a window with it. When I was knee-high to a grasshopper I pondered that weird possession of my dad's.

The potato had been totally desiccated. It was the size of a small walnut and it looked like one. The bread was as hard as a rock. You could have smashed a window with it.

I asked him once, why he kept this odd souvenir. He told me he kept it to remind himself that he would never forget what it was like to be hungry. I never even remotely understood that. I had no "lived experience."

The first time I saw it, the stuff seemed semi-edible. But he kept it for a long time, and if I had been thinking straight, I would have kept it too. To remind me that hunger is very real to some people. It's something they never forget. It's something I don't ever want to really understand.

Now we find ourselves in a situation where the government is so deeply entwined in the allocation and distribution of goods and services, and social behaviour, (defacto communism) that those tons of food are at risk of being wasted or destroyed. Cattle will be cremated and burned. Milk is being dumped. Produce is being buried. And they are running out of spaces to store our fuel.

But "essential" businesses, like beer and liquor stores, are allowed to remain open.

But hey, if it "saves lives," who would complain?

Who would even question such a strategy?

What sparked this rant?

Do you see how dishonest the title is?

The virus didn't cause this. The government did. 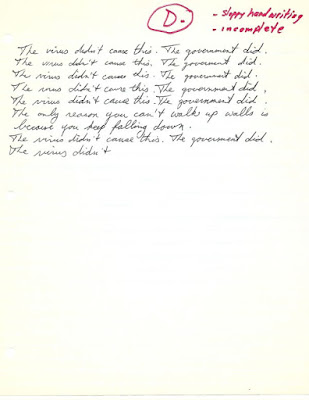