Another comment was censored by the Liberal Party's propaganda platform. From their page about retail surcharges to recover damages caused by GOVINC-19 lockdowns. 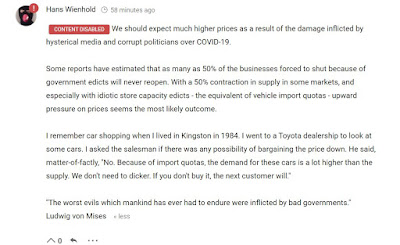 Stay Home and Go Outside

A friend wrote to me this morning saying,

"Check out Doug Ford's Mussolini style rant about more testing. "We need to test all taxi drivers, Uber, transit, random...on and on. He sounds like a psychopath. Wouldn't surprise me if they hire by-law testers that will have the authority to stick a squab up your nose or your arse."

They already set the stage for all of this as far back as when they mandated seat-belts and motorcycle helmets. It was a violation of basic human rights back then, which is why people like me opposed it, but the counter-argument as was perfectly stated, re seat-belts by then Ontario Attorney General, Roy McMurtry I believe went,

The "right" in that case was free medical care. The "responsibility" was in submission to government edicts aimed at keeping medicare costs down.

THAT WAS ALWAYS THE MAIN REASON I WAS AGAINST SOCIALIZED MEDICINE from the start. I recognized the principle that was being established and that you could not have your cake and eat it too. You can't have socialism AND freedom. It's one or the other.

Ironically, it was the generation of Canadians who supposedly fought for FREEDOM in two world wars who then came home and voted themselves into slavery, in exchange for "safety" and other free stuff.

I used to joke that, if ever they adopted government-funded dental care, mandatory tooth brushing would follow, along with roadside checkpoints where cops with tongue depressors would order us to "say ah!"

And here we are. Almost.

Something I wrote way back around the time Ontario's NDP government-mandated bicycle helmets,

Republished on this site:

My reply to a tweet defending the insufferable air-head, Catherine McKenna's touchy-feely video of her swimming exercises.

"Agree to disagree" is an absolutely cringe-worthy statement when ONE SIDE of the disagreement has the POWER to impose THEIR OPINION upon you through the force of law. The next time someone takes a shit in your living room will you be content to just "Agree to disagree?"