What the Heck is Going On in Sweden?

One interesting thing about the numbers out of Sweden that I noticed, is that out of of the top twenty-five countries in terms of mortality rates, Sweden is the only country that reports fewer recoveries (1005) than deaths (2653.)

Some quick and dirty spreadsheet work:

This apparent anomaly adds credence to the Angry Foreigner's claim that in socialist Sweden, many of the sick are just being left to die, as was the practice in some primitive hunter-gatherer societies where capitalist greed was allegedly unknown.

Also, Sweden is taking a lot of heat for its refusal to destroy its economy over COVID-19. Sweden has recorded a proportionately higher number of deaths, 2,653, than its Scandinavian neighbors. 2,653 out of about 10 million people represents .027% of its entire population so far.

To the extent that this information is reliable, the death count is ball-parking at a much lower sum than the numbers of deaths originally predicted - 2.2 million dead people in the United States (0.65%) and 500,000 in the U.K. (0.79%) from COVID-19 if no action were taken to slow the virus and flatten the economy. In other words, assuming a similar mortality rate for Sweden of 0.65%, we should have expected about 65,000 deaths in Sweden.

Using the Swedish data to date, of a 0.027% mortality rate without flattening the economy, the corresponding death count for the U.S. could be expected to have been in the neighborhood of 91,000 instead of 2.2 million. This puts the U.S. fatality rate in the same ballpark as the 2017/2018 flu season in the U.S. which had a reported 80,000 deaths.

If the numerous claims about the falsification of death certificates in the U.S. turn out to have any merit, the COVID-19 mortality rate could indeed put it in the ballpark of a severe seasonal flu, or even lower.

If an accounting of the number of deaths caused by the media-driven panic, the closure of businesses, and the failure of people to get timely help for other serious medical conditions is ever to be made, well who knows? The cure might indeed turn out to have been worse than the disease.

These CBC reporters are either totally dishonest or completely clueless.

Brazil has a share of "confirmed" cases proportionate to its share of the population of the continent.

Notice there are no comments allowed below the CBC "report."

Brazil reports 6,750 deaths, so far, attributed to COVID-19. If Canada currently had the same proportional death rate, it would equal 37/212 X 6,750 = ‭1,178 deaths. The current death rate in Canada is 3,564 with measures in place to flatten the economy. That is more than TRIPLE Brazil's death rate. 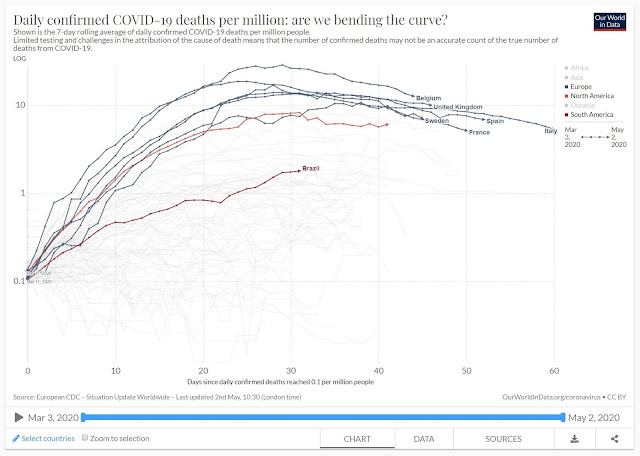 The Focus on COVID-19 Is Hurting Other Patients: Dr. Jeffrey A. Singer

And this just in: