Do you know what REALLY PISSES ME OFF about censorship? It deprives the audience of any opportunity to determine FOR THEMSELVES whether or not the prohibited material does, in fact, contain so-called hate speech. It reflects the colossal arrogance of the gatekeepers in arrogating to themselves the RIGHT and the POWER to be the final judges of the information to which the public should have access.

In this time of rampant fake news, one cannot help but develop the very strong impression that so-called "hate speech" is ANYTHING that the self-appointed gatekeepers of THE TRUTH say it is, even if it ISN'T.

And that it could, in fact, even be the truth, or at least, contain elements of the truth as well as references to other material that would help any TRUTH SEEKER to further investigate the validity of any of the claims made.

That is just downright manipulation of information. It's pure brainwashing. It's downright dishonest.

Perhaps, worst of all, to anyone possessing half a neuron, is that it's all so FUCKING OBVIOUS!

Also worth noting. It took less than four days for the offending material to be scrubbed from Youtube after I posted the link.

Call me paranoid but this is the first time I have had THIS problem in Blogger. All of a sudden, I can't embed images in my blogs. The image I wanted to upload was the screenshot of what you will see when you click on THIS LINK. 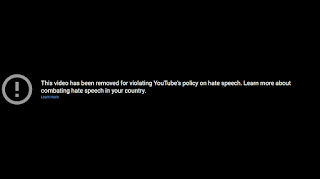 The above rant applies to the link entry I posted on Friday, November 22, 2019.

Here it is again.

Having had plenty of time now to study how bullshit is spread, from the ETS scam to global warming and now the hysterical attempts to depose the lawfully elected president of the united states, it has motivated me to examine other areas of seemingly immutable "truth." You wouldn't believe the directions in which this process is taking me.

The title of the video is "Setting the Record Straight with Ernst Zundel."

Let it be known that, at this point, I have no opinion on the validity of the officially sanctioned and legally enforced holocaust story. Again, given what I have learned over the years I can be certain of only one thing. There is a lot of BS, fake history, hidden history, and fake news in the world today. You really can't believe anything you see or hear.

With this experience, I have growing confidence in my ability to sniff out BS at a much faster rate than I used to. For example, when the Fake News was spewing its reports about Assad gassing his own people I knew that THAT was a crock of shit from the get-go. A very handy tool in BS detection is to employ the old standby question, "cui bono?"

According to the notorious hate group, the Southern Poverty Law Center, BitChute site hosts "hate-fueled material". They don't want people to use BitChute.

The video that YouTube erased, unsurprisingly, can still be watched on BitChute. For now.

History as most Canadians learned it.