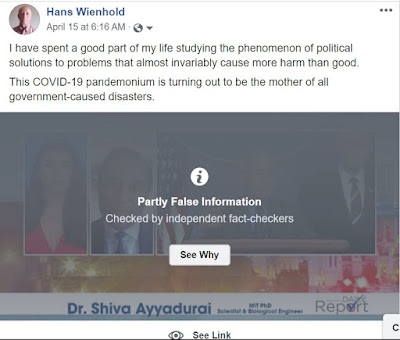 Maybe if I say it loud enough, and often enough, people will start to believe it.

Why do the fake stream media keep on lying about this?

I watch the news on my local station over my rabbit ears, and occasionally jump over to a CTV broadcast from Barrie which comes in on channel 35.

I DO NOT tune in to these stations for the NEWS, even though that is what I watch. I tune in so that I will know what kind of horseshit they are spewing into the open, wide open, gapingly open minds of the hoi polloi, and then comparing that with the behavior I see in public and the vomit that spews forth from the mouths of our political "leaders."

Okay, that is not entirely true. Because of my house arrest, and the habit I recently developed of turning on the television, I have also been watching some of the re-runs of old shows like, "I Dream of Genie," "Happy Days," and "Cheers." If ever there was a time for nostalgia, this is it. The shows may be a lot of bull, but the casual, unrestricted behavior of the characters is very familiar. The spontaneous order of unregulated social interaction without the need for masks and painted lines on the floor may now be gone forever.

But even those shows are being constantly interrupted by CH's Evening News repeater, Taz Boga, as she and the rest keep on pounding their message away into the minds of their somnambulating receptacles.

"Job losses caused by the virus."

"Closed businesses caused by the virus."

Do you remember what Climate Barbie famously said?

"if you actually say it louder, we’ve learned in the House of Commons, if you repeat it, if you say it louder, if that is your talking point, people will totally believe it!”

Oh, and that reminds me of that famous statement of another twentieth-century figure who said,

"If you tell a lie big enough and keep repeating it, people will eventually come to believe it. The lie can be maintained only for such time as the State can shield the people from the political, economic and/or military consequences of the lie. It thus becomes vitally important for the State to use all of its powers to repress dissent, for the truth is the mortal enemy of the lie, and thus by extension, the truth is the greatest enemy of the State." 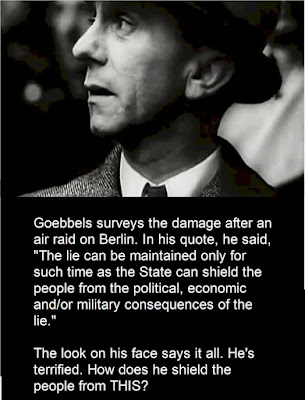 and compare that to a recent headline,

In other words, the Liberal government of Canada is demanding that it alone has the power to define, and distribute, or restrict "the truth."

Is it time to start pushing back?

It turns out he was kicked out of his position on the board of directors of Transparency International Germany, for daring to criticize the German government's response to COVID-19.

Similar things happen to climate experts who don't buy into the climate hoax.

Why are the politicians and their mainstream media propagandists not talking about administering a test for COVID-19 antibodies?

Instead, they are only reporting the number of "confirmed cases" which is really kind of meaningless, and comparing THAT number to the number of deaths to come up with their scary 7% mortality rate.

The real number would include the number of people who, not only have the virus, but those who have the antibodies.

I don't know what that number is, does anyone? But I know this from simple math, the 7% number would almost certainly be LESS. 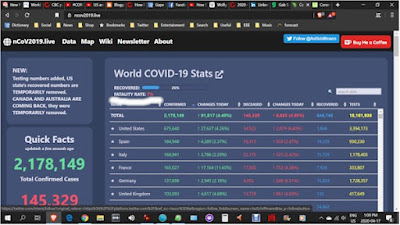 I just got back from grocery shopping.

After wandering up the cereal aisle to grab a few boxes, I noticed the freezer with the meat pies I was looking for, so I turned around, loaded up and continued in that direction.

A staffer approached me from the opposite direction and scolded me for going the wrong way on a one-way aisle. I could feel the anger welling up in me as I asked her,

"What are you going to do, give me a ticket?"

More words were exchanged. I can't exactly remember what was said other than her telling me "they" would shut the store down if these new pedestrian traffic laws were not obeyed. I walked past her.

Then I went to the checkout. I asked the security guard which counter to use, and he pointed to the one right in front of me before he noticed the six-pack of Old Milwaukee in my cart, whereupon he told me I had to use a different checkout.

I don't respond well to having my movements regulated to such a minute degree.

At this point, I just laughed at the absurdity of it all and commented to the cashier that this was all BS and it was time to go back to "normal." Then she got miffed and like a trained parrot sounded out the familiar "well if it saves lives" mantra.

I told her I am getting sick of hearing that. She then said, "As far as I'm concerned, *they're* not going far enough." By now I was talking quite loud and drawing attention from others in the store. I said, "and how many lives are going to be lost if you shut down the entire economy?"

Then I quoted Prime Minister Turdboy, "Enough is enough!"

One of the entry/exit monitors told me to calm down as I exited the store.

I had a short conversation outside with the cart retriever guy and, being out of earshot of other people who might rat on him, he ended up agreeing with most of what I said.

It's time to end this shit NOW!

The fact that this massive police state reaction is happening right now doesn't really phase me. I've been painfully aware of this unfolding process for decades. What really pisses me off is seeing how the public uncritically gobbles it up, stands in line, and follows the little arrows on the floor.

COVID-19 Lethality Not Much Different Than Flu, Says New Study

The anecdotal evidence is starting to roll in. I knew this was going to happen. That is why I get pissed off when some supermarket Nazi tells me it's all about "saving lives."

I can't say I have been strongly affected by this insanity. Yet. I've had a doctor's appointment, a physiotherapy session, and a dental appointment canceled because of it, but none of my issues were critical.

But I visualize a spectrum of conditions, from mild to severe. And though I don't have any numbers to support it, I am certain that people on the extreme margins are dying because of the delays, disruptions, and cancellations. NOT because of the virus. And there is no scoreboard for them. They go down the memory hole. They don't have an entry on the balance sheet.

I have seen two reports of teenaged girls who have committed suicide over the fear and social isolation wrought by the media/government exploitation of this flu variant.

Ron Paul mentioned in his Liberty Report an old guy who delayed going to the hospital because of the chaos surrounding the panic, and instead, died.

Last night, while talking to a friend on the phone, he told me about a friend of his whose wife was feeling quite ill on the weekend but delayed a trip to the hospital because she was afraid of delays, disruptions, or refusal of care due to the CoronaPanic. Maybe her fears were exaggerated. Can you blame her?

My friend remarked, wryly, "They'll probably write her up as a victim of COVID-19."

In the old days, there were "trusted authorities." Newspapers. Television. The churches. School teachers.

I was also going to add politicians. But when have they ever been thought of as trusted authorities?

In the movie, "Master and Commander," Russel Crowe makes a quip about finding "an honest man in parliament," though I can't remember the rest. I think the others laughed when he said it. Anyway, the point is, the common belief about the integrity of politicians is as old as history.

Thanks to the internet, we now know that most of our trusted authorities were fraudulent.

So why, oh why, do so many people suddenly place their trust in the people whom they know, otherwise, NEVER tell the truth?